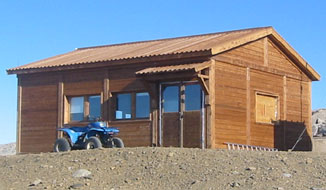 Weather stations on the airstrip provide real-time data to the Operation Room. Generally they are typically dedicate to the measure the wind speed and direction, necessary information for landing of helicopters or small planes. Instead for large aircraft (e.g. C130) other information, such as visibility and cloud height become mandatory. For this reason the Observatory has dedicated two new automatic weather stations to flight operations.

From October to December, the airstrip for a C130 is prepared on the ice pack. In late December, as the summer goes on, the sea ice breaks and the ship lands in the same place ... the airport becomes a harbor!